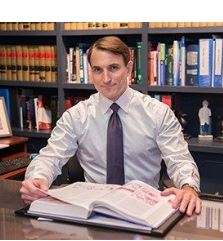 Peter J. "Tres" Gulden III is a partner at Faiella & Gulden, P.A. He’s a third-generation lawyer who joined his mother Elizabeth Hawthorne Faiella’s practice in 2004, becoming a partner in 2008. Before receiving his Doctor of Jurisprudence from Vanderbilt University Law School, Mr. Gulden earned a Master’s Degree in Theological Studies from the Divinity School at Duke University. This unique background, combined with the fact that his father was a doctor of internal medicine, has shaped Peter’s perspective on medical ethics and the need to hold medical providers and facilities accountable. "Our clients often tell us that they don’t want what happened to them happening to anyone else. And so if we can change one hospital policy, sharpen one rule of patient care, or simply ensure that basic standards of practice are followed, then our work makes all patients safer," Peter told Orlando Style magazine in a 2014 profile.

Peter Gulden has won multiple verdicts and settlements of $1 million or more and has honed his legal skills under the tutelage of his mother, Elizabeth, who’s been practicing law for more than four decades. Together, they authored "Battling Ageism in Cancer Negligence Cases," which was featured in Trial Magazine in 2007.

In addition to Florida, Mr. Gulden is also licensed to practice in the District of Columbia. The firm has also handled claims in North Carolina and Tennessee.

Bachelor of Arts with Honors, Washington and Jefferson College, Pennsylvania; major in History, 1999

The United States District Court for the Middle District of Florida

Fellow of the Florida Bar Foundation

American Society of Bioethics and Humanities