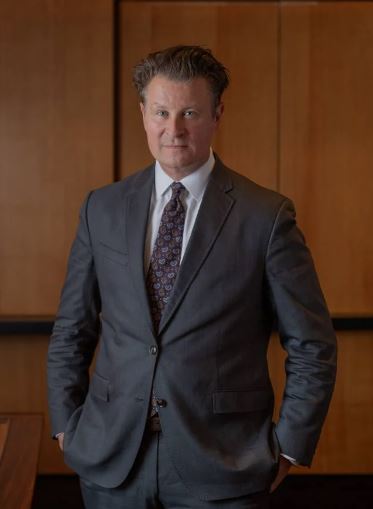 American Board of Trial Attorneys (ABOTA), Washington Trial Lawyer of the Year, 2019

"Boss of the Year," National Association of Legal Secretaries of Pierce County, 2008

Tom Vertetis is a trial lawyer with a passionate commitment to assisting those in need of help. Prior to law school, Tom was committed to his community by serving as the Student Body President at the University of San Diego, where he graduated with honors. He earned his law degree from Villanova University School of Law. After completing a clerkship with the Honorable Jane B. Cantor of the New Jersey Superior Court, he served as an assistant prosecutor in New Jersey prosecuting hundreds of criminal matters on behalf of injured victims.

As a trial attorney, Tom has tried in excess of 50 cases to juries and obtained plaintiff's verdicts in diverse cases including a $13.95 million medical malpractice jury verdict for a 22 year old client who suffered a catastrophic embolic stroke during an elective cardiac catheterization, a $4.5 million jury verdict in federal court for a 19 year old Amtrak passenger seriously injured following the train’s derailment, a $3.075 million jury verdict for the wrongful termination and defamation of a 20-year decorated senior county prosecutor, a $1 million medical malpractice verdict against a surgeon for an improper bladder laceration post-hysterectomy, a $1.4 million verdict against the State of Washington for unlawful conduct against a local business, and a $776,400 medical malpractice verdict for a nineteen year-old woman who suffered permanent injuries from a mistreated fracture to her right arm. He has also successfully resolved many important lawsuits short of trial including one of the largest dental malpractice settlements in the State of Washington for a client left with partial permanent facial paralysis after an over-injection of dental anesthetic, a $12.5 million medical malpractice settlement for an infant left with birth injuries due to a negligent delivery, a $5.425 million settlement for a client struck by a motor vehicle that suffered permanent injury and a $3.4 million medical malpractice settlement for a client that suffered a permanent brain injury as a result of a complication during a cardiac catheterization.

Tom has been consistently recognized as a "Super Lawyer" by Washington Law & Politics, a recognition bestowed upon only 5% of eligible attorneys each year in the state. Since 2014, he has been recognized as a "Top 100" lawyer in Washington by Washington Law and Politics. Tom has achieved an "AV" peer rating, the highest rating available for legal ability and ethical standards, by Martindale Hubbell. He has been rated as "superb" by avvo.com. Tom was nominated to the "Top 40 under 40 in Washington" by the National Trial Lawyers Association. Tom sits as the vice-president and board member on Washington's Campaign for Equal Justice and is a past president of the Pierce County Bar Foundation. Recently, Tom was named a Fellow of the Litigation Counsel of America, a trial lawyer honorary society where fellowship is by invitation only and is limited to less than one-half of one percent of American lawyers. He has previously been awarded the "Local Hero Award" by the Washington State Bar Association, the coveted "Boss of the Year" award by the Pierce County National Association of Legal Professionals and the "Pro Bono Award" by the Pierce County Bar Association.

Tom's eldest child has autism. He is a strong advocate and champion for disabled children. He currently serves on the Board of Ashley House, a South Sound care provider for medically fragile children, and has served on the Board of the Academy of Precision Learning, an inclusive Seattle K-12 school which provides educational services to both typical developing and students on the autism spectrum. He also supports Autism awareness and is a regular emcee for the University of Washington Experimental Education Unit's annual auction.

American Board of Trial Advocates, Associate

Campaign for Equal Justice, Board of Directors, Vice-President

Campaign for Equal Justice, Board of Directors, Vice-President, 2019 to Present

Board of Directors, Ashley House for Medically Fragile Children , 2009 to Present

Friends of the University of Washington Experimental Education Unit, Member, 2011 to Present

Board of Directors, The Academy of Precision Learning