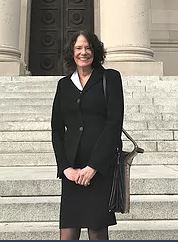 Susan Machler has devoted her legal career to personal injury and civil litigation. She has extensive experience advocating for her clients at trial and in arbitrations in motor vehicle accident, medical malpractice, products liability, and negligence cases. Ms. Machler has considerable background in appellate cases, having both written briefs and argued cases in court for Osborn Machler and other firms.

When possible, Ms. Machler provides pro bono legal services for persons with disabilities and their families. She works with women and men in child support and custody matters.

Ms. Machler is frequently asked to write for legal publications and speak at seminars. Most recently, she wrote two chapters for the WSAJ Products Liability Deskbook, published in 2014, and spoke at the kick-off seminar for the deskbook. She spoke at the Luvera Seminar in 2013 at the WSAJ annual convention.

Ms. Machler is active in her community, serving Arts Commissioner for the City of Kent. She has given her support to providing food assistance for low income and homeless people in the Federal Way area. Ms. Machler is an award winning artist.