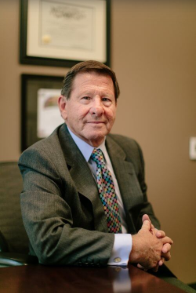 Steven J. Weinberg is an accomplished trial lawyer and partner of McCune Wright Arevalo, LLP. A 1975 graduate of Pepperdine University School of Law, and previously University of California Los Angeles, Mr. Weinberg has focused his legal career on cases involving personal injury, wrongful death, medical malpractice, and nursing home abuse. He serves as the managing attorney of the McCune Wright Arevalo, LLP Coachella Valley office, and will lead in the practice areas of medical malpractice and nursing home abuse cases.

During his time as a practicing lawyer, Mr. Weinberg has tried over 100 cases. He worked in three law offices after graduating from law school, and eventually founded his own practice in 1988. He worked in his own office until joining the McCune Wright Arevalo, LLP team in 2019.

Mr. Weinberg has achieved multiple professional recognitions throughout his years as a lawyer, including maintaining an AV rating since 1979, multiple listings by the Super Lawyers organization, and recognition by the Consumer Attorneys of California for his excellence in professional liability, product liability, and general negligence litigation.

In addition to his work as an attorney, Mr. Weinberg has been involved in several professional organizations such as the American Board of Trial Advocates (ABOTA), the Association of Trial Lawyers of America, and the Million Dollar Advocates Forum. He currently serves as Governor Emeritus of the Consumer Attorneys of California, a position he has held since 2004. Mr. Weinberg has also offered his legal knowledge to various educational institutions as an adjunct professor, teaching classes at Desert College of Law, California Desert Trial Academy College of Law, and his alma mater, Pepperdine University.

Association of Trial Lawyers of America

California Continuing Education of the Bar