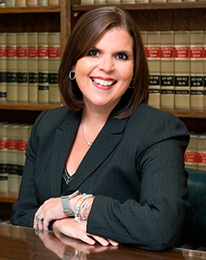 Ms. Lindsay Tygart is a senior member of Coker Law’s medical malpractice division with more than a decade of experience handling personal injury, medical malpractice, neglect, wrongful death and catastrophic injury cases. Prior to beginning her legal career in 2006, she gained much of her practical litigation experience as a certified legal intern for the Office of Public Defender of the 4th Judicial Circuit.

Ms. Tygart’s talent and commitment to the profession have been well recognized within the industry. She has been honored for both her professional proficiency and her pro bono efforts throughout law school and her legal career. Born and raised in Jacksonville, she comes from a long line of legal professionals. Her now-retired father was a Jacksonville civil trial attorney for more than 50 years, her husband and two brothers are attorneys, and she has two uncles and a cousin that sit as circuit judges.

Ms. Tygart can be reached at her email address: llt@cokerlaw.com

The Signs Were There But Doctors Failed To Identify A Stroke

Physician Communication Could Be The Key To Preventing Medical Malpractice

How Is Medical Malpractice Proven in Florida?

Jacksonville Women Lawyers Association, "The Past, Present and Future of Parental Leave in the Legal Profession," 2020

“How to Utilize Your Paralegal,” Florida State College of Jacksonville, Legal Studies Department, 2011 – 2015