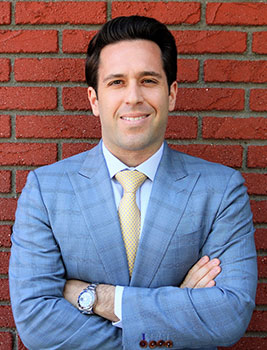 Kyle Newman is a third-generation plaintiff’s personal injury attorney who began practicing with his father, James Newman, upon graduating from Touro Law School in 2008. He is the senior trial attorney at James Newman, P.C. and plays a prominent role in all cases from inception to resolution.

Kyle has devoted himself to becoming an accomplished trial attorney in the fields of personal injury and medical malpractice and has been selected for the past four consecutive years (2017, 2018, 2019, 2020) to the Super Lawyers Rising Star List, which recognizes the top 2.5% of all New York attorneys under 40 years old. He has also been selected as one of America’s Top 100 Personal Injury Attorneys (2018, 2019, 2020), the National Academy of Personal Injury Attorneys Top 10 under 40 for New York City, Attorney of the Year Top 100 Registry, AI International’s Wrongful Death & Medical Malpractice Attorney of the Year, New York’s Top Lawyers 2020, and has been featured multiple times in the New York Law Journal Verdicts & Settlements Hall of Fame.

Due to his trial successes Kyle was admitted into the prestigious Million-Dollar and Multi-Million-Dollar Advocates Forum, which recognizes only those attorneys who have recovered over $1 million and $3 million dollars on behalf of their clients.

At only 25 years old and fresh out of law school Kyle was trying the first case of his career in Manhattan Supreme Court where he achieved a maximum jury verdict of $100,000.00 on behalf of a car accident victim. This first victory would set the bar high for a near perfect trial record of over 75 jury verdicts in all five boroughs in cases ranging from medical malpractice, wrongful death, construction accidents, slip and falls, bus collisions, car accidents, wrongful arrest and assault & battery.

Before his 30th birthday Kyle returned his first medical malpractice verdict of over one million dollars for a client who suffered near fatal injuries as a result of the malpractice of an orthopedic surgeon. At the close of the nearly month long trial in Brooklyn Supreme Court the jury awarded a sum of $1,691,385.00, which was recognized as one of the highest verdicts for a medical malpractice action involving surgical errors and was featured in the New York Law Journal’s November 2014 “Medical Malpractice Verdicts & Settlements Hall of Fame.”

At age 34 Kyle returned his first verdict in excess of three million dollars for a 35-year old man left permanently disabled from a failed bilateral laparoscopic inguinal hernia repair. The plaintiff required two additional open hernia surgeries and was left with permanent ilioinguinal and genitofemoral nerve damage of the groin. After a two-week trial in New York County Supreme Court against a top New York City defense firm the jury returned a verdict of $3,037,500.00, the largest of Kyle’s career to date. This verdict was recognized as one of the Top 10 Medical Malpractice Verdicts in New York County for 2017.

By age 35 Kyle would obtain his largest settlement ever following a nearly three-week long medical malpractice trial in Bronx Supreme Court for a combined $6,100,000.00 This case involved a negligently performed “emergency” hemorrhoid surgery at a major Bronx Hospital, resulting in a severe infection, abscess and fistula, which was a straw-like connection from the client’s rectum to an opening on his buttocks. The defendants, who refused to offer any money at the beginning of the trial, ended up settling for over six million dollars following Kyle’s cross-examination of the defendant doctors. This was the highest recovery of Kyle’s career to date.

Notable other verdicts and settlements include:

$6,000,000.00 settlement on behalf of an infant that suffered brain damage, cerebral palsy and developmental delay due to care malpractice committed during labor and delivery at a major New York City Hospital;

$3,000,000.00 settlement following a two-week long trial for a construction worker who suffered multiple fractures as a result of falling from a scaffolding nearly 30 feet from the ground. Miraculously our client survived, however due to the defendants’ failure to provide a safe work environment he would require life long medical care and loss of earnings.

$1,750,000.00 settlement on behalf of a brain damaged infant that suffered deprivation of oxygen during labor and delivery. In this case we fought the New York City Health & Hospitals Corporation over the course of ten years, beginning with a precedent-setting appeal in the 1st Appellate Division, followed by beating a motion for summary judgment in this extremely complex medical malpractice action.

$1,500,000.00 settlement in a wrongful death action involving a 40-year old mother of two who died as a result of a pulmonary embolism following a hysterectomy;

$1,500,000.00 settlement before trial in a medical malpractice action against a vascular surgeon who improperly performed sclerotherapy for varicose veins leading to an occluded artery of the foot, ischemia and gangrene necessitating partial foot and multiple toe amputation;

$1,400,000.00 settlement in a medical malpractice action involving the negligent prescription of the antipsychotic medication Perphenazine, which caused a form of tardive dyskenesia involving involuntary and painful spasm of the neck, face, esophagus and respiratory system;

$1,200,000.00 settlement in a sexual abuse case involving a 65-year old who was sexually abused by a physician at a major metropolitan hospital when our client was only 10 years old. Because of New York’s Child Victim’s Act our client was able to bring an action against the physician and hospital even though the statute of limitations had expired;

$1,000,000.00 settlement for a motorcyclist who suffered a badly fractured wrist and humerus requiring open reduction internal fixation surgeries when he was ejected from his motorcycle due to an improperly milled/paved roadway;

$950,000.00 settlement at trial for a woman who shattered her elbow as a result of a trip and fall over broken and uneven concrete within the Chambers Street subway station in downtown Manhattan;

$930,000.00 trial verdict for a 39-year old hair stylist who suffered a torn labrum of her right hip as a result of a motor vehicle accident where she was the back seat passenger of a taxi cab that was struck by a motorist making an illegal left hand turn;

$900,000.00 settlement on behalf of an injured construction worker who suffered a traumatic brain injury while working at a trade show in New York City;

$750,000.00 settlement before trial of a pedestrian struck at high speed by a driver on a cell phone;

$750,000 settlement in a medical malpractice case involving a surgeon who punctured a patient’s colon during a hernia repair

$510,350.00 trial verdict for a laborer who suffered a fractured ankle as a result of a scaffolding collapse;

$500,000.00 trial verdict for husband and wife injured in a severe two-car motor vehicle accident. They sustained soft tissue injuries and one of the plaintiff’s underwent two arthroscopic surgeries;

$450,000.00 settlement at trial for a doorman at a luxury New York City apartment building who was assaulted by an intoxicated tenant;

When he is not on trial or in Court you can find Kyle at the office working alongside his father and his younger brother Devin, his best friend and associate attorney at the firm. He is also constantly on the go with clients, investigating accident locations, preparing with medical or engineering experts or attending mediations and arbitrations.

Kyle remains humbled by the trust and unwavering support of his father, which he considers the single greatest gift a young attorney and son could ask for. Armed with the passion and determination to take on the most difficult of cases Kyle remains devoted to his clients and their families and will continue to fight for justice on behalf of those who have suffering devastating harms and losses.