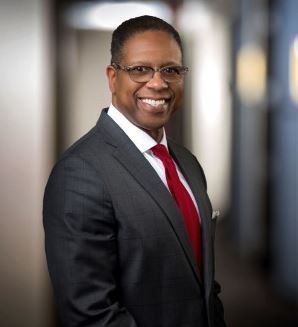 Ken Watkins is an accomplished trial attorney and Senior Shareholder with Sommers Schwartz. Over the course of his career, he has obtained numerous multimillion-dollar settlements on behalf of the clients he's been proud to represent. His achievements include one of the largest seven-digit medical malpractice cases in Macomb County in 2008, and his election to membership in the exclusive Million Dollar Verdict Club.

Outside of the practice, Ken is known for giving back to the community. He has spoken on several occasions at the Detroit Public Schools Career Days; serves on board of directors for Urban Solutions, Inc., an organization dedicated to providing scholarships to inner-city youths each year. Ken was a charter member and trustee for the Motor City Optimist Club, assisting area youth through community activities and organizational empowerment and previously served as co-president of the Brother Rice High School Dad's Club and participated on its board of directors for three years.

Ken was recently elected to the Board of Directors of the Oakland Schools Education Foundation, and also serves on the Board of Directors for Don Bosco Hall, a private non-profit agency that provides supportive human services to enhance the quality of life for youth and their families residing in the Metropolitan Detroit-Wayne County Community.

In the videos below, Ken explains the law of medical malpractice, how it can happen, and what compensation is available to victims and their families:

A 74-year-old widowed plaintiff underwent a hysterectomy procedure following a diagnosis of endometrial cancer. During the operation, injury was done to her iliac veins, causing a 20-liter blood loss. The extensive hemorrhage brought on myocardial infarction, respiratory and renal failure, and fluid overload, which necessitated subsequent surgeries. Two weeks after the initial procedure, she showed signs of mental status changes due to encephalopathy and was re-intubated for shortness of breath and treated for suspected aspiration pneumonia, renal failure, and possible septic shock. Over the next several months, she experienced infection, bacteremia, and gangrene in her right foot, which was ultimately amputated. Ken secured a $1.5 million settlement for the client.

A woman suffered permanent impairment and scarring of her right arm resulting from necrotizing fasciitis, a serious bacterial skin infection that spreads quickly and kills the body's soft tissue. The plaintiff claimed that because of the defendants' misdiagnosis and failure to quickly treat the flesh-eating disease, her condition worsened, necessitating extensive debridement of damaged and infected tissue and causing disfigurement and lack of mobility that will last the rest of her life. Ken obtained a $2,570,795 jury verdict, but before trial, a case evaluation panel recommended a total award of $900,000, which the defendants rejected in part, triggering case evaluation sanctions that the defendants would have to pay the plaintiff.

A 53-year-old-surgical patient died after receiving excessive fluids during her hospitalization. The woman's estate claimed that mismanagement of her medical care was the cause of her wrongful death. Ken's investigation, detailed work-up, and completion of all pretrial discovery for the lawsuit laid the foundation for a courtroom victory that resulted in a $1.705 million verdict for the plaintiff. Ken was unable to try this matter due to another wrongful death case, which resulted in a multimillion-dollar settlement, was scheduled for trial at the same time.

A woman who faithfully saw the defendant ophthalmologist for more than 20 years filed suit against the doctor for his failure to appreciate and timely treat her ocular hypertension and severe open angle glaucoma. The plaintiff claimed that due to the defendant's medical malpractice, she suffers from substantial and permanent loss of vision that has limited her earning capacity and mobility, and causes her to have accidents from a lack of peripheral vision. Ken secured a confidential $320,000 settlement after a case evaluation panel recommended an award of $225,000 in the plaintiff's favor, which the defendants accepted but the plaintiff rejected.

A 33-year-old- apartment tenant died as a result of a three-story fall caused by an improperly maintained guardrail. The man's estate alleged that had the building maintenance staff inspected the rail, they would have discovered brackets that were broken, rusted, and detached from the wall, which could have been repaired, preventing the fall and the decedent's untimely death. The case was resolved by a confidential multi-million settlement for the plaintiff.

An eight-year-old was taken to surgery to correct "bow legs," but a presumed anesthesia error left the child with significant brain damage. Although the hospital and doctors insisted that they had done nothing wrong, a settlement just under seven million dollars was paid after Ken investigated and worked up the case.

An unsuspecting 19-year-old basketball player suffered from a connective tissue disorder that made him susceptible to aortic dissections. He went to the emergency room with acute chest pain and was later sent home, only to return with worsening symptoms. Diagnosis and treatment was allegedly delayed two days, almost claiming the young man's life. However, the majority of his intestines required removal and Ken was retained to seek recourse. The details of the settlement are subject to a non-disclosure agreement.

A frustrated mother sought help from multiple attorneys for her son's cerebral palsy diagnoses, to no avail, until Ken reviewed the case and uncovered an apparent oversight the child had been misdiagnosed and inappropriately treated for his seizure disorder, which resulted in further deterioration. Ken obtained a confidential multimillion-dollar settlement.

A 44-year-old husband and father visited his family physician complaining of chest pain, and the doctor ordered various tests. While portions of his cardiac evaluations were abnormal, no catheterization was pursued. Within weeks, the man died of an acute myocardial infarct, and the family consulted Ken to determine if the death should have been prevented. Ken brought in top-notch cardiac experts who testified under oath that the deceased had a better than 90% chance to live had appropriate and timely catheterization been pursued, leading to a substantial, confidential settlement.

Michigan Association for Justice Executive Board Sustaining, Board of Directors

Urban Solutions, Inc. Board of Directors

Don Bosco Hall Board of Director