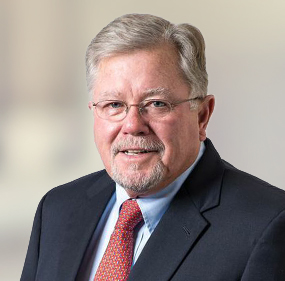 Mr. Howard Coker is the President and a founding partner of Coker Law. Recognized by his peers as a prominent Florida trial attorney, he is a passionate and active advocate. In the pursuit of justice, Mr. Coker has tried over 350 jury trials to conclusion and handled thousands of mediated settlements – a top record for results.

For his tireless service and consistent commitment to both professional and community organizations, Mr. Coker has received a number of significant awards and honors. He holds multiple lifetime achievement awards, including the Jacksonville Business Journal’s Lifetime Achievement Award (2017), and the Florida Justice Association’s Perry Nichols Award (2006) and Al J. Cone Lifetime Achievement Award (2009). He has been named as one of Florida Trend Magazine’s top 1% “Legal Elite”, listed as a Florida Super Lawyer every year since the program’s inception in 2006, and consistently chosen as a Top 100 Florida Super Lawyer.

Among Mr. Coker’s numerous professional affiliations are his 2008 appointment by the Florida Governor as a member of the Florida Supreme Court Judicial Nominating Commission and his 2010 appointment by the Florida Supreme Court to the Florida Innocence Commission. He was awarded the ABA-TIPS Award for Lifetime Pursuit of Justice in 2011, named Best Lawyers’ Jacksonville Personal Injury Litigator of the Year in 2014, received the 2016 Compassionate Gladiator Award for Strength, Skill, Drive and Heart from the Florida Justice Association and the 2017 Ultimate Attorney Lifetime Achievement Award from the Jacksonville Business Journal. Aside from these distinguished accomplishments, Mr. Coker continues to volunteer his time and efforts to a long list of civic and nonprofit organizations, even receiving the 2017 Bob Hayes “Man of the Year” Community Service Award.

Family Vindicated By Jury Verdict of More Than $850,000

Slip on Movie Theater Floor Results in Jury Award of $233,000

Jury Awards $1.4 Million To Sisters Hit By Truck While Stuck in Traffic

Board Certified in Civil Trial Practice, The Florida Bar (1985)

Courts of the State of Florida

Supreme Court of the United States

Association of Trial Lawyers of America:

American Board of Trial Advocates:

Charter Fellow of the American Board of Trial Advocates

Florida Federation of American Board of Trial Advocates:

Florida Lawyer Association for the Maintenance of Excellence:

Jacksonville Zoo and Gardens: Board of Directors, Chairman

Spina Bifida Association of Jacksonville Board of Directors

The Best Lawyers in America

Who’s Who in America?

American Board of Trial Advocacy, 2003 “Lawyer of the Year”

Selected each year since program’s inception in 2006

Speaker, Induction of Candidates for Admission to The Florida Bar, October 1998.

“How to Motivate Members to Use The Florida Bar”– Speaker, Collier County Bar Association, Naples, December 1998.

Masters in Trial Seminar, Direct of Plaintiff’s Expert, Speaker, The American Board of Trial Advocates, June 2007.