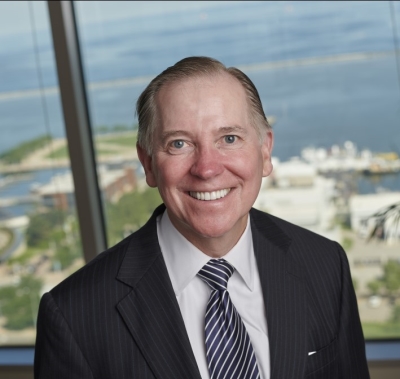 Dennis R. Lansdowne has been with the Spangenberg firm since 1985 and has been a partner since 1990. During that time he has represented individuals in catastrophic injury and wrongful death cases as well as large corporations. "My background and training have allowed me to pursue cases for both people and businesses that have suffered harm. It is an interesting and exciting practice."

Dennis has represented hundreds of people who have been seriously injured or lost a loved one because of the negligence of a doctor, nurse, nursing home, or another healthcare worker. He is well-known for being able to make complex medicine easy for a jury to understand.

The National Institute of Medicine has estimated that 280,000 Americans are killed in hospitals because of negligence every year.

That is four times the number killed in automobile crashes. The vast majority of these deaths do not result in a lawsuit, many times because the families aren't aware that negligence has occurred. "The sad fact is, we don't have too many malpractice lawsuits. We have too few." Dennis's passion about medical negligence led him to create and teach a course on the subject for several years at his alma mater, Cleveland-Marshall College of Law.

He has remained involved with the law school and is a past president of the alumni association and a current member of the school's advisory council for the health law and policy center. He has also had the distinguished honor of being the recipient of the 2013 Alumnus of the Year Award given by Cleveland-Marshall College of law for outstanding professional achievement, leadership and service to the community.

Insurance Companies- An Industry in Need of Reform

When an insured pays premiums, sometimes year after year, they expect the coverage they paid for. Too often the claim is met with delay and denial. Dennis has represented insureds, from individuals to large corporations, in order to force the insurance company to honor its promises. All of the insurance cases handled by the Spangenberg firm are done on a contingency fee basis. "The contingency fee is attractive for individual clients, but we have found that businesses can also benefit from this type of fee arrangement."

1985-1991: Member of the Executive Council of the Young Lawyers Section, Cleveland Bar Association

1989-1990: Chairman of the Executive Council of the Young Lawyers Section, Cleveland Bar Association

Beck Center for Arts, Board of Directors

Committee on the Homeless, former co-Chairman

A frequent lecturer at local and national legal education seminars

American Board of Trial Advocates

The Court of Nisi Prius

2019: Cleveland Academy of Trial Attorneys – Plaintiff Attorney’s Guide to (or away from) Mediation

2015: Cleveland-Marshall College of Law - “Contagion: A Conversation about Using Public Health Laws to Prevent the Spread of Infectious Diseases,” Panelist.

2014: The Don Keenan Reptile Superstars Seminar - The theory of Primacy and Recency and Reptile approaches to final argument, Lecturer.

2013: “Alumnus of the Year” Award, Cleveland-Marshall College of Law

Listed in “The Best Lawyers in America”

Verdict for a man who spent 10 hours in the Emergency Room before it was recognized that he had spinal cord compression. He is a permanent paraplegic as a result of the delay.

Class action settlement for consumers who did not receive full refunds from a national retailer.

Settlement for a woman whose signs and symptoms of heart block were ignored leading to arrest. She suffered permanent brain damage.

Settlement for a young woman attacked by her boyfriend at a fraternity party. Woman developed arteriovenous fistula and was rendered incomplete quadriplegic.

Verdict for man rendered partial paraplegic following a spinal injection for pain. The man was not a good candidate for the surgery, was not given informal consent and appropriate safety problems were not used.

Settlement for a high school swimmer rendered quadriplegic diving from too high starting blocks into too shallow water.

Dennis and his wife, Kim, have four children. They are members of the St. Colman parish on Cleveland's near west side.

In addition to his work with Cleveland-Marshall and other law-related organizations, Dennis is on the Board of Directors for the Beck Center for the Arts. Beck Center is one of the largest arts education and performance institutions in Northeast Ohio, offering professional theatre productions, gallery exhibits, and a variety of classes for children and adults. Dennis sits currently on the Board of the Cleveland Ballet. He is a founding supporter of the North East Ohio Collaborative to End Human Trafficking.